Garvey
Marcus Mosiah Garvey is a Jamaican National Hero, and you will find his picture on Jamaican bank notes and coins. Born in Saint Ann’s Bay in 1887, he led a full life as a journalist, editor, publisher, philosopher and a political activist. In 1914 he founded the Universal Negro Improvement Association (UNIA) in Jamaica and in the United States, which was dedicated to racial pride, economic self-sufficiency and the formation of an independent black nation in Africa. He was also a founding member of the Black Star (shipping) Line, and founded the School of African Philosophy in Toronto. Throughout his life he worked to improve the lives of black people both in Jamaica and abroad.

He died in London in 1940, twenty years later his body was brought back to Jamaica where he was re-interred in National Heroes Park, where you will find his shrine and statue. For more information go to Wikipedia. 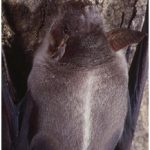 Greater Bulldog Bat (Noctilioleporinus LR/lc)
This is a “fishing bat”, which uses the pouch between its legs to scoop up its prey. It will also feed on insects, the wingspan can measure up to a meter and they can fly up to 40 miles or about 60 km an hour. The Caribbean subspecies has a pale stripe down its back. This bat can swim! A great video clip from the BBC can be found here.
[separator top=”80″] 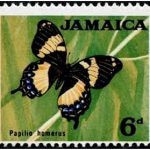 Giant Swallowtail Butterfly (Pterourushomerus)
This endangered species, is the largest butterfly in the Western Hemisphere, although its range in Jamaica has been reduced to the Cockpit country and parts of the Blue and John Crow Mountains. 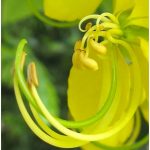 Golden Shower
Or in Latin, Cassia fistula, originated in India. In Jamaica it is planted as an ornamental plant. I could have added a photo of a tree in bloom, but I may as well have painted a swathe of bright yellow and you would have got the idea, because a profusion of blooms will hide the leaves. So, here is a detail of one flower, which I find just as beautiful. 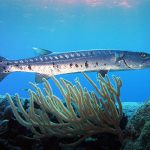 Great Barracuda (Sphyraena barracuda)
These are large fish. Long, thin with sharp teeth and a lower protruding jaw. They are not known to be dangerous to swimmers, although they can be attracted to anything that glints and sparkles and may follow a scuba diver. I must say that I prefer mine smoked on a plate. I found a recipe for smoking barracuda here . 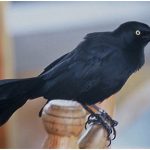 In Jamaica this gregarious bird is known as the Cling Cling. You will recognize them because of their distinctive call that sounds a lot like their name, and the fact that they hang out around people waiting for tidbits or dropped crumbs.

I like their distinct black plumage, which creates such a contrast to the bright flowers and surroundings of Jamaica.

It is often said that the first inhabitants of the Green Grotto Caves were the Arawaks, and then runaway slaves and smugglers. The caves are home to nine of the 21 species of bat living in Jamaica. They have also been named, Runaway Bay Caves and Discovery Bay Caves. Take the guided tour or you may get lost. I remember going on a tour as a child and being spellbound by the stalagmites and stalactites and the crystal clear underground lake.

It was in the caves that a kind stranger explained that stalactites hang down, because they need to hang on tight and that Stalagmites grow up. They can take thousands of years to form. I have posted a photo that labels the different formations that you may find in the caves, Instead of a photo of the Green Grotto. This is so you will be able to name all that you see with authority!

The caves were purchased in 1999 by the Urban Development Corporation and are operated by the Saint Ann Development Company for ecotourism. In 2003 the caves were the first in the world, and the first site in the Caribbean, to be granted Green Globe Certification. The caves are 1 525 m long and 12 m deep, you will find them on the road between Ocho Rios to Montego Bay. 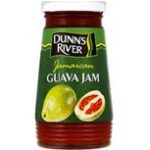 Guava (Psidiumguajava)
The word guava may have been an Arawak word that came from guayabo meaning guava tree. The fruit originated in the Caribbean and Central America. One guava contains four times the amount of Vitamin C found in an orange! This is one of my favorite fruits, which I like to eat stewed and chilled. I was amazed to discover that this plant comes from the same family (Myrtaceae) as pimento (All Spice), Cinnamon, Clove and Nutmeg. Round and green, you split it open to find delicate pink flesh, which you can eat as is. But wait …it also can be made into jam, as you can see in the photo, which reminds me …I have an appointment to go snorkeling with those folks from Cool Runnings Catamaran Cruises. 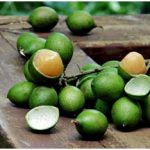 You should be able to find guineps being sold at the side of the road in bunches. They are very much like a lychee, which is a close relative. They are small and round with a big stone in the middle. You need to crack the tight outer skin with your teeth. I suck on the seed until all the taste is gone. I find the tangy, sweet flavor quenches my thirst better than water. The guinep is native to Central America and the tropics and ‘Old World’tropics.

Gungo peas are also called pigeon peas and have been cultivated for about 3 500 years. This pea originated in India then travelled to Africa where Europeans found it and called it Congo Pea. It travelled to the Americas in the seventeenth century with the slave trade. 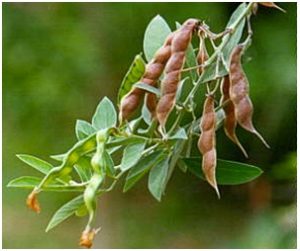 I have copied a recipe directly from Wikipedia  because it looked so yummy and described the use of these peas so well. “Gungo peas are particularly associated with Christmas. The peas are boiled with pimento seeds (allspice) and garlic until tender. Salt, pepper, scotch bonnet pepper, thyme, onion (usually spring onion), grated ginger and coconut milk are then added along with the rice and left to simmer until cooked. Variations of the recipe include the use of salt pork or beef instead of salt.

This flavors the dish well and reduces the need for additional protein. Rice and peas the classic Sunday lunch dish is usually served with a stewed meat, such as chicken, beef, lamb or pork, or fish or seafood such as shrimp, crab or king fish.”

You may have seen that we eat a lot of rice and peas in Jamaica, the grain and the legume combined form a protein! Well, now you know!