Cool Runnings – Fun Boat Cruises now looks at lizards in Jamaica. Those are the friendly, cute creatures that look at you with those thousand year old eyes that seem to be smiling. Their throats rise in an orange curve and then as you go to look at them closer they flick away and are gone.

You will also find the Jamaican Iguana (Cyclura collei), which are large and clumsy and used to be eaten by the Taino or Arawak Indians, and are still on the menu in Mexico. The International Union for Conservation of Nature (IUCN) considers the Jamaican Iguana to be critically endangered.

There are geckos, which are here represented by the Croaking Lizard (Aristelliger praesignis), which used to frighten us as children and galliwasp, such as the Jamaican Galliwasp (Celestus crusculus), which can be found throughout most of the island. 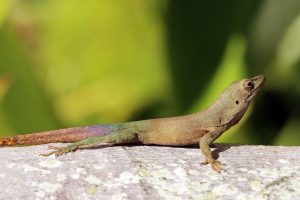 Cool Runnings – Fun Boat Cruises finds that there are at least twenty-two different types of lizards living in Jamaica.

Among them are some of our favorites the Jamaican Giant Anole (Anolis garmani), which is a bright green lizard; Jamaican Brown Anole (Anolis lineatopus), better known as a Common lizard in Jamaica and Graham’s Anole (Anolis grahami). 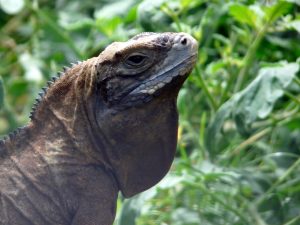 You have probably seen a lizard change from greenish to brown to black when stressed. They can also shed their tails if caught and will grow a new one back.

The Jamaican Iguana, seen in the photo, can grow to 428 mm or 16.9 inches long; the female is slightly shorter and lays from six to 20 eggs in shallow burrows.

As imposing as these creatures seem, they eat fruit, flowers, leaves and a few insects.

Over the centuries their habitat has been reduced to some areas of the Hellshire Hills around Kingston. It is said that the imported Indian mongoose did much to decimate the Iguana population in Jamaica after its arrival in the nineteenth century.

If you are interested to see more lizards than we can show here, Cool Runnings – Fun Boat Cruises recommends this site ‘Caripherp’ for more detailed information on reptiles and amphibians in Jamaica.