Get it? Now is De time or Now is the time! Or D time!!! As in teatime! OK, here we continue the Cool Runnings Cruises ABC.

The youngest son of Bob Marley, and Cindy Breakspeare jazz musician, and former Miss World. He is also known as Tough Gong. Most recently known for Superheavy in 2011 and Set up Shop Vol. 1 in 2013 and the single Riot in 2013. 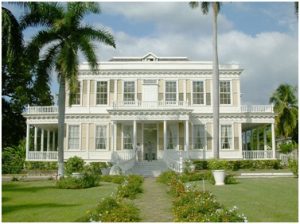 When in Kingston take a drive and visit this beautifully renovated example of Jamaican Georgian architecture, which was built in 1881 by Jamaica’s first black millionaire George Stiebel. He had become wealthy in Venezuela after a good many adventures and investing in a gold mine, he later became Custos of Saint Andrew.[separator top=”180″]

There is a lot more about Mr Stiebel here: http://jamaicans.com/tourist/articles_travel/DevonHouse.shtml, which is well worth reading!

There are many shops in the courtyard, among them the famous I-Scream shop and the Devon House Bakery. I like to go for an ice cream or a cup of the very fine coffee they serve there. 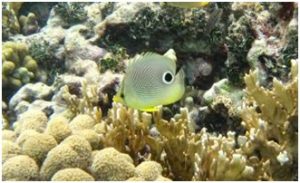 The lab is located in what is also known as Puerto Seco or Dry Harbor Bay. It was founded in 1965 by Professor Thomas F. Goreau.

Scuba divers may wish to note that this lab has the only Hyperbaric Chamber in Jamaica. Here research is being carried out on ecosystem restoration such as to save Jamaica’s coral reefs.

The Doctor Bird (Trochilus polytmus), also known as the Red-billed streamertail is the national bird of Jamaica. The female is a very cute little brown bird.

It is said that the Arawak or Taino believed the bird was magically empowered and they called it the God Bird. Killing a Doctor Bird will bring you fearful bad luck. This bird is indigenous to Jamaica, it feeds on insects and on nectar from plants, which it draws out with its long bill.[separator top=”60″] 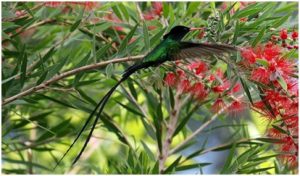 This is one of the most famous beaches in Jamaica. Dr Alexander James McCatty founded a sanatorium there in 1880. Today it is open to the public, but you need to pay to enter. The water is clear and the beach is part of the protected Montego Bay Marine Park. 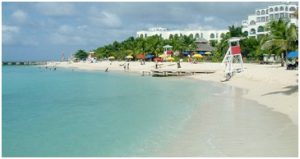 Dreadlocks are also called Dreads, Locks or Jata, which is Hindi. The Rastafarians are not the ones who started this hairstyle. Today we associate dreadlocks with Rastafarians, but dreadlocks have been worn by many people down the ages from Semitic people to the Hamitic in North and East Africa. It seems that people grow their hair like this for spiritual reasons and the Rastafarians can be included in this group.[separator top=”60″]

Book to go snorkeling at Dunn’s River falls with Cool Runnings Catamaran cruises. The river, is of course the River Dunn, the falls are near Ocho Rios, and are 180 feet (55 m) high and 600 feet (180 m) long. There is a white sand beach and the warm waters of the Caribbean make a pleasant contrast to the cool waters of the falls.

The water is full of calcium carbonate, whichbuilds up on the rocksas the water flows over them rather than wearing them away.

You will find a plaque commemorating the battle that was fought close by it reads: Near this spot was fought the Battle of las Chorreras in 1657, when the English defeated the Spanish expeditionary force from Cuba.

Charles Pryce was the first owner of “Las Chorreras”, which later became part of the 276 acre Belmont property, which was purchased by the Government of Jamaica in 1972. 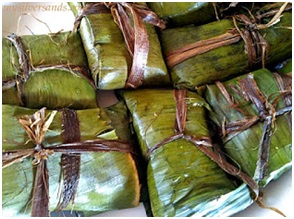 This dessert is also known as Blue Drawers and Tie-a-leaf. I remember duckunoo being prepared for me. Cornmeal cooked with coconut and spices and wrapped in a banana leaf that was then dropped in boiling water. You open this package on your plate and drizzle honey or golden syrup or molasses over it and eat. I have read this is a Christmas recipe, but I thought it was for any time you please, I only now get the feeling that maybe I was just a spoiled child! 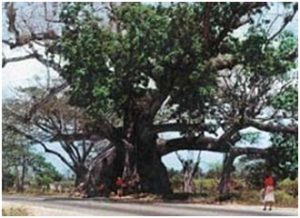 Is a Jamaican patois word that originated in northwest Africa, it means spirit or ghost. They are said to live in the huge roots of the cotton trees. I am afraid I was unable to take a photo or draw a picture of a duppy, but I did find this picture of Tom Cringles Cotton Tree, which I clearly remember standing at the side of the road into Kingston. No longer there, it probably harbored many duppies.