The History of Dunn’s River Falls

The History of Dunn’s River Falls

You can book a special cruise to Dunn’s River Falls with Cool Runnings Catamaran Cruises, but first just a little bit about the history. 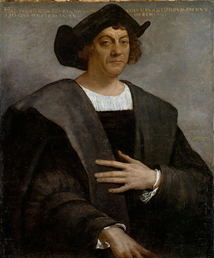 As we know, Christopher Columbus landed on the shores of Jamaica on the fifth of May 1494 and it is said that he was greeted by 60 000 people of the Arawak tribe.

The Taino or the Arawak people had named the island Xaymaca or land of wood and water or land of springs, so, it is easy to see, just looking at the photo of Dunn’s River Falls, how Jamaica got its name.

The Spanish settled in Jamaica in 1509, but it was not until 1655 that the English took control, but a Spanish commander Cristóbal Arnaldo Isasi had travelled to the hills to live with the Maroons, who were escaped slaves. He sent a message requesting troops from Cuba and on 30 October 1657 a Spanish force was assembled to win back Jamaica from the English occupying force under the Governor Edward D’Oyley.

However, ever on the alert, D’Oyley had noticed Spanish ships approaching Jamaica from the north and sent a contingent of 900 soldiers to meet the Spanish.

At the bottom of the falls, you will find the Jamaican Historical Society plaque commemorating the battle: Near this spot was fought the battle of Las Chorreras in 1657, when the English defeated the Spanish expeditionary force from Cuba. 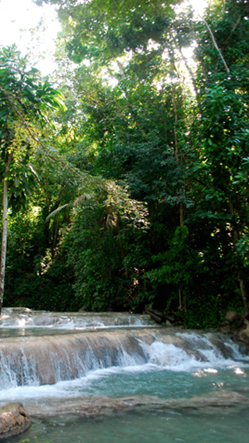 Just to remind us, Chorreras is the Spanish word for waterfalls, and it is from this word that Ocho Rios is supposed to have got its name.

A short battle was fought on the beach near Dunn’s River Falls, the Spanish were defeated and, again, Isasi fled to the hills and his force was captured and sent back to Cuba. Yet again, Isasi attempted to win back Jamaica in 1658 at Rio Nuovo, but D’Oyley and his soldiers defeated him again. It was not until 1670 that Jamaica was formerly handed to the British under the Treaty of Madrid.

More recently, Dunn’s River Falls was once part of the 276 acre Belmont property, once owned by a John Davis. The house was built in the eighteenth century. In 1972, Belmont property was purchased by the Jamaican government and is now run by the Urban Development Corporation.

The falls themselves stretch over 600 ft or 183 m. They can be easily climbed by anyone following an expert guide, or there is the easy route up the falls on the walkway built alongside.

There are two Cool Runnings cruises to Dunn’s River a morning cruise that sails on Mondays and Wednesdays at 9 am and a cruise that departs at 12.30 everyday. This is the ‘snorkel Dunn’s River Cruise’ where those who don’t already know how to snorkel will receive tips and training from the crew.

You are warned that this cruise is super active, with snorkelling, climbing the waterfalls the possibility of lunch and a great party on board as you return to the docks in Ocho Rios, so it is not the ideal outing for those who want to sit and relax! For these people they might want to choose the Cool Runnings sunset cruise with a delicious dinner.