The Cool Runnings Guide to Matrimony

The Cool Runnings Guide to Matrimony

Well, summer is coming up in at least the northern half of the world, and we would like to give you some instructions about Matrimony. No, not the getting married Matrimony, but our favorite Jamaican fruit salad.

Some will tell you that Matrimony is made with only three fruits, grapefruits, oranges and star apple. Our version uses seven fruit because that is the advice we were given on how to make a spectacular fruit salad.

We know you won’t be able to find everything listed here everywhere, but we will give you the basic seven fruit and then you can invent and substitute when outside Jamaica. This is something you can eat before, during or after your boat ride in Ocho Rios.

Photo by Hans B. of Star Apple cut in half, (Chrysophyllum cainito)

What makes Matrimony? The people who make traditional Matrimony say that it is the mingled taste of the sweet condensed milk with the star apple and the sharp tangy taste of the citrus that makes a perfect matrimony. Skipping over the Internet we found a few variations, one that adds sweetened coconut milk, and another that uses kiwi fruit and chopped crystalized ginger.

Seven fruits to make a salad fit for a wedding

The following recipe is a mix and match of a few that can be found around the web, or ones we have heard during a boat ride in Ocho Rios, and the recipe includes our favorite fruits. 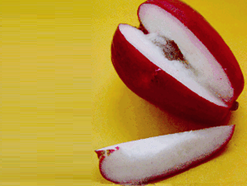 Star apple (cut in half and scoop out flesh, remove seeds); Naseberry, (scoop out flesh, remove seeds); Otaheite apple, paw paw (or papaya), mango, grapefruit, Ortanique. Although it takes a little time, it is advised to cut the fruit into small pieces, take out all the white from the citrus and you will find the flavors blend together better; the color tends towards a pale, pretty orange.

Once you have cut all your fruit into small pieces you can add a pinch or so of nutmeg, which tends to heighten the flavor of the fruit. You may want to add a little rum, but this will be entirely up to you. For the traditional Matrimony, the recipe calls for sweetened condensed milk, which may make some people’s teeth hurt just thinking about it, so you are allowed to leave this out because the fruit salad will be sweet enough all ready. 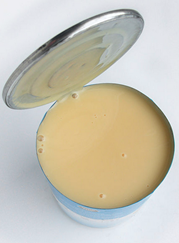 If Matrimony is not sweet enough for you, a young Jamaican has just told me how to make his favorite snack: Milo, which is a chocolate and malted barley drink, or Ovaltine, mixed with condensed milk. The Milo is mixed in a cup with the condensed milk until it is a sticky, stodgy mess. Then you get to eat this mixture with a spoon. Just a little because it is very, very sweet. Enjoy.

Now I am off to join the others at Mahogany Bay for a Cool Runnings Catamaran Cruises boat ride in Ocho Rios.