I was thinking of going on a Cool Runnings Sunset Cruise. Since I am one of those people who like to swim but don’t like to get wet, I thought I would do a little research.

But before I get into that …. You know that poem by a guy named John Mansfield? Goes something like, “Must go down to the sea again to the lonely sea and the sky.”

Whoa … Forget that! There is nothing lonely about our sea and sky in Jamaica. Well, not unless you really want to find that quiet beach, with those rustling palm leaves gently stirring in a warm breeze, far out of range of those happy people having a good time drinking their very tasty rum punches or Piña Coladas and splashing about in the water.

Must say, I love that, to lie in the shallows, resting on my elbows, seated on that fine white sand, feet out faintly moving, gently rocking with those tiny, silky waves in water you can hardly feel because it is so warm, and listening to the happy talk of children playing in the sand close by.

Then, wait a bit, there is that second line of that guy Mansfield’s poem, “And all I ask is a tall ship and a star to steer her by,” and that is when I really got to thinking about taking a trip myself with Cool Runnings Catamaran cruises Jamaica.

But, before I booked my trip, I decided to find out more about catamarans. Yes, I know they have two hulls. Searching Wikipedia (if you want to know more go here http://en.wikipedia.org/wiki/Catamaran), I read that the word comes from the Tamil language of south India and northeast Sri-Lanka and was originally spelled Kattu Maram.

The Polynesians also made and sailed catamarans over long distances. Here’s a picture of what a Polynesian catamaran looked like. 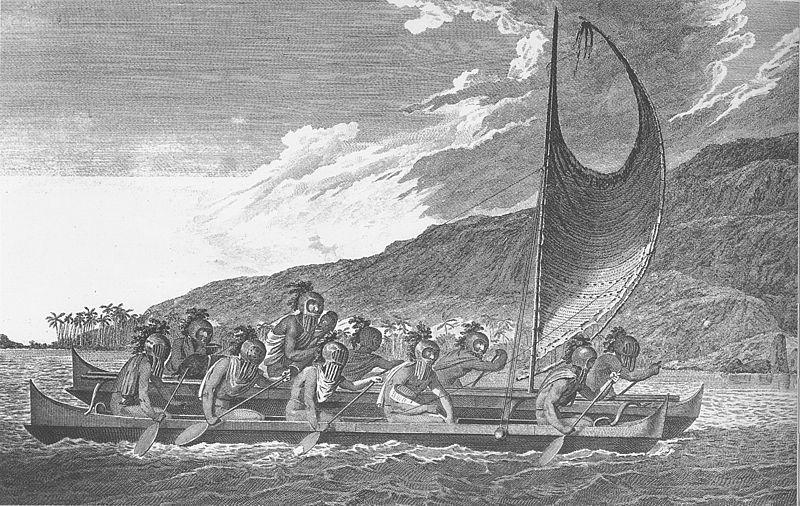 Then I read that the English adventurer and buccaneer William Dampier was on the southwest coast of India looking for business opportunities and found something built like a catamaran, more like a raft, these are still in use today and called kattumaram meaning logs tied together.

Here is a painting of William Dampier, I add him here because he was offered a job on a sugar plantation in Jamaica, which he gave up. He was also known for rescuing a man named Alexander Selkirk, a former crew-mate who may have inspired Daniel Defoe’s Robinson Crusoe. It is also written that he joined a group of pirates led by Captain Bartholomew Sharp in Jamaica and also sailed around the world three times.

Then, how many of us even thought that catamarans were also used by Greek engineers under Ptolemy II (283–246 BC) as obelisk carriers!

In 1662 a William Petty of the Royal Society designed a catamaran to sail faster, in shallower waters. But no one was interested in this weird design until the 1820s or 1830s when an Englishman called May Flower Crisp built a two-hulled merchant ship in Burma.

Later, an American, Nathanael Herreshoff, began to build catamarans in 1877, namely ‘Amaryllis’, which was very speedy at the Centennial Regatta held on 22 June 1876. The losers kicked up such a fuss that catamarans were banned from competing in all the regular classes until the 1970s!

Well, I don’t think we will be sailing very fast, because a sunset cruise is supposed to be relaxing and fun filled. You are supposed to have time to admire the sunset and rum-inanate.

Oh … and just to remind you the Sunset Cruises take place only on a Thursday, just love those colorful Jamaican sunsets. Happiness!