Cool Runnings Catamarans Jamaica – A to Z Fun Facts – “A”

Cool Runnings Catamarans Jamaica – A to Z Fun Facts – “A”

Here begins the Cool Runnings Catamaran Tours Alphabet of Jamaica, which will give you a glimpse of our fruit, vegetables, insects, animals and places to visit and a little of our history. In the end, when we have tried and tested our alphabet on you, dear reader, we will publish an improved version (resulting of course from all your kind and witty comments) in a book. 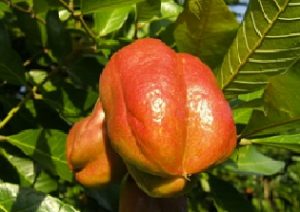 The Latin name is Blighiasap ida, honoring Captain Bligh who took this plant from Jamaica and introduced it to the Royal Botanic Gardens at Kew in England. The fruit has been grown in Jamaica since 1778 when it was imported from West Africa.

You may be offered ackee at breakfast, it looks a lot like scrambled eggs,          and will most probably be served with a side of boiled green banana, which has a pleasant nutty flavor. The pods must be open if you buy them yourself, otherwise they can make you sick.

With such an introduction, it may be some surprise to find that this is Jamaica’s national fruit. It is eaten with salt fish, which is salted cod. Although cod has nothing to do with Jamaica, it was bartered for rum. Cod was shipped from Newfoundland in Canada and Jamaica supplied the north with rum.

Now some will tell you that Anansi was a spider and others will tell you that he was a man, but I can tell you that he was both a spider and a man. His stories came to Jamaica, brought by the Ashanti who carried their stories with them from West Africa. He is the trickster hero in much the same way as is Brer Rabbit. I remember having to beg Leah, the woman who cooked for my grandmother, to tell me these stories. You don’t have to beg me because you will find some here: http://en.wikisource.org/wiki/Jamaica_Anansi_Stories.

What I love about this 1818 illustration by John Gabriel Stedman is the ease with which this strong woman holds her bow and arrow. It turns out that it was the Arawak women, much like women the world over, who did most of the work growing food and working in the cassava patches while the men went out and …fished.

The Arawak were the first to populate Jamaica; from 600 AD they were the sole inhabitants of the island, until 1494 when the Spanish arrived. In fact it is from them that we get the name Jamaica, from the word Xaymaca meaning land of wood and water. They were the first people Christopher Columbus came in contact with in 1492 when he finally stepped off his boat. Their name comes from a Lacunan-Arawak word aru, meaning cassava, which was a great part of their diet.

Is a small town on a bay in Port Antonio. The town has 18 churches the Anglican Church on Main Street is 181 years old. The eighteenth-century Metcalf Market is a Jamaica Heritage Site. Annotto Bay is where Green Castle estate is located, one of the largest exporters of coconuts, orchids and papayas in the parish. There is the Annatto festival, celebrating the plant that gives the town its name. It is also the site of the Fort George Great House. (From an article by Erica Virtue, the Observer).

The seeds of the Annatto or Achiote plant are used for food coloring and have a sweet, peppery flavor. They were also used to make body paint and lipstick.

Open fruit of Bixa orellana, showing the seeds from which Annatto is extracted, photographed by: Leonardo Ré-Jorge: 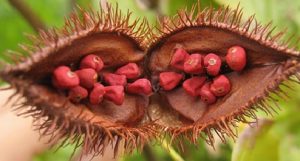