Cool Runnings Catamarans – A to Z Fun Facts Jamaica- “B”

Cool Runnings Catamarans – A to Z Fun Facts Jamaica- “B”

We are continuing with the Cool Runnings Catamaran Tours Alphabet of Jamaica, which will give you a glimpse of our fruit, vegetables, insects, animals and places to visit and a little of our history. In the end, when we have tried and tested our alphabet on you, dear reader, we will publish an improved version (resulting of course from all your kind and witty comments) in a book. Here is B and next month you will get C, D and E!

This is a flat bread that came down to us from the Arawak, now I did not know that. It is made of cassava. Don’t care what they say but I prefer mine fried in coconut oil and served up with hot pepper shrimp. In the 1990s the United Nations and the Jamaican Government established a program to revive Bammy production.

I know we all know what a banana looks like, but how many of us have eaten a banana picked ripe from the tree? Do you know how sweet that banana is? 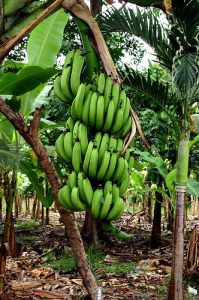 The banana may first have been cultivated as food in Papua New Guinea and it was the Spanish who brought them to Jamaica in the sixteenth century. American companies began regular shipments from Jamaica in the 1880s. Jamaica was the first commercial producer of bananas in the Western Hemisphere. The banana varieties grown in Jamaica include Robusta, Williams (Ziv), Grand Nain, Lacatan, Gros Michel and Silk, which are the Chinese, Apple and Thousand Fingers bananas.

Is, as its name implies a deep blue. It is a natural lagoon, which you can find about 20 minutes drive from Port Antonio. Icy underground streams feed the lagoon mixed with the warm waters of the Caribbean Sea.  It is about 180 feet deep (m) and fed by many freshwater springs. The locals know this place as Blue Hole, but the name was changed after the movie Blue Lagoon was shot there. 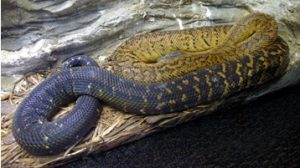 I am adding this photo here from my good friend Wikipedia because, I must admit, I didn’t know we had one. I have never seen a snake in Jamaica and my mother always told me they had all been gobbled up a long time ago by the mongoose that you may catch a glimpse sight of now and again.

I am glad to say there are no venomous snakes in Jamaica and this one lives in the Cockpit Country, a place well worth the visit if only to see those wonderful hills.

Source: This photo of the Jamaican boa (Epicratessubflavus) was taken by TimVickers

This is one of the few beaches in Jamaica that attracts surfers. On the north coast it is nine miles from the town of Port Antonio. Why is it called Boston Beach? After the Boston Fruit Company that started to export bananas from there in 1870, this became the United Fruit Company, then United Brands and today the company is called Del Monte Corporation. Another reason we love Boston Beach is the Jerk Chicken or Pork that can be found there, about the best on the island. Some say it is the birthplace of this cooking technique, jerking. 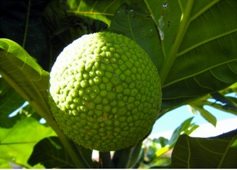 You will be served this boiled, fried or baked. It is good tasting however it is served up. Native to the Pacific Islands and Malaysia, it was originally brought to the West Indies in 1791, by the captain of the Providence, William Bligh, who you may already know because of his trouble with crew on a previous exhibition to the South Pacific on a plant collecting expedition, when he was captain of the HMS Bounty.