Home>Blog>R for Cool Runnings
Previous Next

This is a Jamaican patois word used to express surprise. Such as in “Rathid we had a great time on the Cool Runnings Sunset Cruise!”

You know Red Stripe, your tasted it yet? This is Jamaica’s very own lager type beer. It is brewed in Jamaica by Desnoes & Geddes. On Wikipedia we find that, “It was first produced in 1938 from a recipe developed by Paul H. Cotter (the son of D&G founder E. P. Cotter) and Bill Martindale.”

Here is a photo of some folks on a Cool Runnings Cruise, some are probably enjoying a Red Stripe Beer! 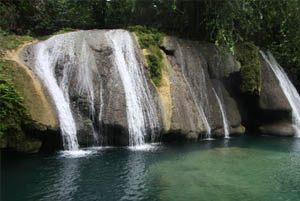 You can find Reach Falls in the parish of Portland. The falls are about 45 minutes east of Port Anotonio. It is said that the falls were first discovered by runaway slaves who sought refuge in the John Crow Mountains.

Reach Falls is where you can find 23 species of fern, parrots and wild pigs, the falls are an ecological sanctuary.

You may also have seen that Tom Cruise’s ‘Cocktails’ and the remake of ‘Lord of the Flies’ included scenes filmed at Reach Falls. 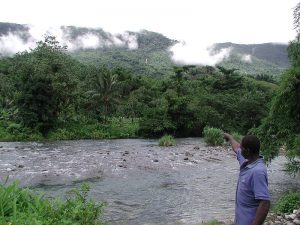 This river is in Portland and was named when the Spanish occupied Jamaica in the fifteenth and sixteenth centuries.

The rainwaters rushing down from the Blue Mountains feed the Rio Grande, which was, and is still is, used to transport bananas on rafts.

Errol Flynn, the legendary Hollywood actor, made rafting on the river for fun popular.

Here a farmer points to his banana trees growing across the Rio Grande.

Rose Hall is a Georgian mansion that was built in the 1770s. Some of us remember it as a ruin, but it was restored in the 1960s.

We cannot write about Rose Hall Great House without mentioning Annie Palmer, whose ghost, it is said, still walks the grounds.

It was discovered, however, by Benjamin Radford, an American writer, that all we know about the evil Annie Palmer comes from a book by Herbert G. de Lisser with the title The White Witch of Rose Hall, published in 1929.

It is said that the original owner of Rose Hall was actually Rosa Palmer, who, although she did have four husbands, was noted for her virtuosity. 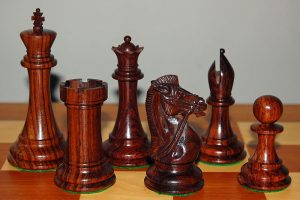 Much Rosewood was once exported from Jamaica. Today, the tree is considered endangered and is listed on the Convention on International Trade in Endangered Species of Wild Fauna and Flora, better known as CITES.

Rosewood may refer to any scented or richly grained wood, usually from the genus Dalbergia. It is the scented wood that gives it its name, rosewood.

Here are chess pieces made out of Rosewood, where you can see the rich, deep color.

From the Negril area Environmental Protection Trust we find that the “Morass Royal Palm is endemic to Jamaica – its distribution is restricted to the Negril Morass and other wetlands in western Jamaica”.

And … “The Negril Morass is the second largest swamp forest in Jamaica – over 6 000 acres of forest.”

“The Royal Palm reserve itself is 300 acres within this forest. There are 114 endemic plant species in the reserve, and some have medicinal purposes”.

If you go to the NAEP website you can take the virtual tour of the Royal Palm Reserve, but you will need Quick Time Player http://www.jpat-jm.com/virtour/royalpalm/negril8cri.html. 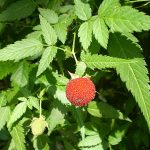 Also knowns as Sandlewood bramble, roseleaf bramble and West Indian raspberry. There are three wild Jamaica-grown species: Rubus jamaicensis, Rubus rosifoius, and Rubus racemosus. This plant is listed as an invasive species, so don’t try introducing it to places where it is not already growing naturally! 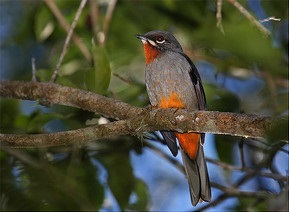 This bird mostly eats insects and lives in Montane forests, which are areas having cooler temperatures and higher rainfall that are located below the subalpine zone.

Is a town in Saint Ann parish that is known for its naturally beautiful beaches. It is now home to a few hotels.

Known to be quieter than Ocho Rios or Montego Bay, it is possibly a naturally good place to go for snorkeling and diving because the reefs are close to the shore.

Or the spotted soap fish is listed as one of the fish that can be found in the waters of the Caribbean bathing the shores of Jamaica. I add it here because it is quite a pretty yellow fish and a lot less scary looking than some of the other fish having Latin names beginning with R!