Ya Man … Yyyyyy for Cool Runnings

Ya Man … Yyyyyy for Cool Runnings

Ok, here we are at Y in the Cool Runnings ABC.

First a few words from the Jamaica Patois dictionary:

‘Ya man’, well you must have heard this even if you have been in Jamaica for only one minute. It means Yes man! Then, ‘Ya soh’ means here. ‘Yaad’ is the word a Jamaican will use for home, or if you are a Jamaican abroad you will say ‘ina-mi-yaad’ to say back home. ‘Yardie’ is then someone who is born and bred in Jamaica. And you may have heard us say, ‘Yuut’, which means youth. Then one favorite is, ‘Yu too nuf’ meaning you’re just full of yourself, or maybe we can say uppity. Now back to the ABC…

You will find white yam and yellow yam, which we read are one and the same family. This tuber is, surprisingly, part of the lily family and can take from 7 to 12 months to grow. It is one of the staple starchy foods eaten here in Jamaica and around the world. Yam is very versatile, you will find it eaten roasted, fried, boiled, baked, and if it is grated you can turn it into a sweet cake.

Sweet potato may also be called yam, but it is not the same thing! I read that if you are going to peel your yam before boiling, one tip is to put oil on your hands because the yam can make your hands itch. What is one of the best ways to eat yam? Well, roasted, then you add a little butter to the steaming hot yam and eat it up fast!

This bird’s Latin name is Amazona collaria, it is also known as the Jamaican amazon, which is endemic to Jamaica. It can be found mostly in the John Crow Mountains. Both males and females have the same coloring, meaning the bird is predominately green with a yellow bill. This parrot is listed as vulnerable because of habitat loss. Trade and export of trapped wild birds is illegal. Remember they are a protected species.

You may have noticed that what everyone else in the world calls a bean, we in Jamaica call a pea. So the pretty Jamaican yellow-eyed bean or pea is a small beige bean that has a yellow circular ‘eye’ at its inner curve. You will find these peas fresh or dried. I read that it was originally cultivated for animal fodder, but they are used in traditional Jamaican food recipes. 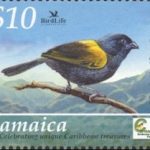 Or, in Latin, Loxipasser anoxanthus. The Yellow-shouldered grass quit is endemic to Jamaica, is very small, growing to about 10·2 to 11·5 cm and can weigh from 10·5 to 12·5 g. Its natural habitats are the hills and mountains of Jamaica. This is the link on Avibase, if you want to see a few photos of this bird and here its song http://avibase.bsc-eoc.org/species.jsp?avibaseid=68C45443A5F3380A. Here is a Jamaican postage stamp showing the Yellow-shouldered grass quit. This bird is generally found in the highlands of Jamaica. 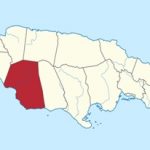 Here is a map of Jamaica showing the location of the parish of Saint Elizabeth, where YS Falls are located. The falls are 120 feet high and are located deep within a sugar plantation, YS Estate. Visitor numbers are monitored and limited to prevent the falls becoming damaged by too much foot traffic. http://www.jamaicatravelandculture.com/destinations/st_elizabeth/ys-falls.htm

The property lies near a bridge over the river of the same name. Some say that the name of the river comes from the Welsh word meaning ‘winding’. I read that on early maps the word is written Wyess, and it is also written that the form YS was first adopted as the estate mark stamped on hogsheads of the Wyess Sugar. 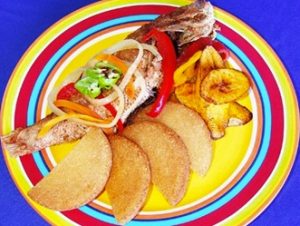 In Latin, Manihot esculenta, This is another word for Cassava, which was a stable of the Arawak diet and was written about under C. What I didn’t tell you is that fried bammies, which are made from cassava, are really good eaten with hot-pepper shrimp. The reason that the bammies are so good is that during the process of being prepared they are soaked in coconut milk and then fried. Here is a link to a recipe. (http://latinfood.about.com/od/recipesbyregion/r/jamaican-bammy-recipe.htm) 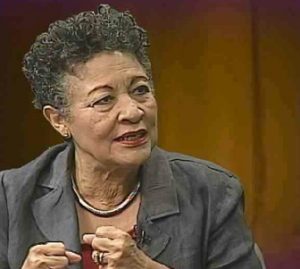 Yvonne Brewster is Jamaica’s foremost theatre director. She was the production manager for ‘The Harder They Come’ and producer for the BBC. MS Brewster started out trail blazing as the first black woman drama student at the Rose Bruford College and the Royal Academy of Music in the United Kingdom. She returned to Jamaica in 1965 to teach drama and helped found the Barn, with Trevor Rhone, which was Jamaica’s first professional theater. In 1985 she helped found the Talawa Theatre Company.

In 1993 she was awarded the Order of the British Empire for services to the arts. In 2001 she was granted an honorary Doctorate from the Open University, United Kingdom. If you want to know more about Yvonne Brewster you can read her autobiography, which is called The Undertaker’s Daughter: The Colourful Life of a Theatre Director (Arcadia Books).

You can hear and see an interview (around 24 minutes) with Yvonne Brewster here with Ian Boyne, aired 3/25/2012, http://televisionjamaica.com/Programmes/Profile.aspx/Videos/16782