When coming to visit Jamaica, many don’t have time to really get to know us. So here we would like to introduce you to a little of our folklore. In this post Cool Runnings Cruises in Ocho Rios and Jamaican folklore, we introduce one of our best-loved characters. He is a true ginnal, which is Jamaica patois for trickster!

In Jamaica there is Brer Anansi, and some may recognize the stories told about him as those that are also told about another famous character, Brer Rabbit. 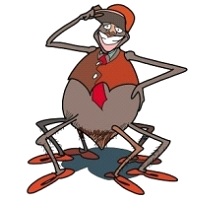 Cool Runnings Cruises in Ocho Rios, here’s Brer Anansi, he is a spider, but others say he is a man, still others go around saying he is both a spider and a man. So, we really cannot be sure.

What we do know is that Brer Anansi stories travelled from Africa in the days of the slave trade, which began in the fifteenth century when the Portuguese took land near Gibraltar, and ended in Jamaica in 1838 with the abolition of the slave trade and emancipation.

The character of Brer Anansi is based on the trickster god-hero, the spider-god who appears in the tales of the Ashanti, who came from the area in Africa that is now called Ghana and, it turns out, most of the slaves transported to Jamaica were Ashanti. So it is in Jamaica that these tales are said to be the best preserved. 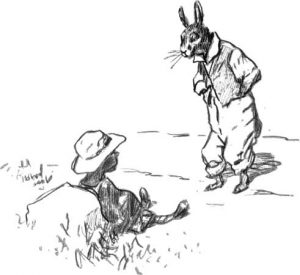 Image via Wiki Commons is a drawing by E.W. Kemble from The Tar-Baby, by Joel Chandler Harris, 1904

Now, Cool Runnings Cruises in Ocho Rios introduces Brer Rabbit. The other character we mentioned, who may be more familiar to American readers, is Brer Rabbit or Bush Rabbit. He was the trickster hero known because of the stories collected by Joel Chandler Harris.

Here is Brer Rabbit stopped in front of the tar baby who appears both in the tales told with Brer Anansi as the hero and with Brer Rabbit.

Brer Rabbit stories are based on those of the trickster hero, a hare, told in West, Central and Southern Africa.

We have read that the Brer Rabbit stories were probably first collected by the Cherokee in the Cherokee Advocate, published in 1875, the same year that the folklore collector Chandler Harris was born. (See Wikipedia for more information on this).

The trickster-god-hero also appears in tales told by the Algonquin in Canada, where he is named Nanabozho, The Great Hare, who is also a shape-shifter; much like Brer Anansi because we are never sure if he is a spider, a man, or both a spider and a man.

So, I hope you have enjoyed this little journey into the background of the Brer Anansi and Brer Rabbit stories. Next time we may even get to tell you a few stories, or share a link to the great Miss Lou telling an Anansi story.

Now, I think it is time to bask in the sun a little, read about Brer Anansi in one of the collections of stories by Philip Sherlock, who was one of our great Jamaican writers. Then off to book a boat cruise with Cool Runnings Catamaran Cruises in Ocho Rios for more fun in the sun … or shade!