Visitors to Jamaica will notice that ‘Out of Many One People’ is our motto. This is because Jamaica is made up of people who have come to the island from many places around the world. We have people who hail from Syria, Ireland, Germany, Africa, India, and China to name only a few.

They have brought with them their own culture, food and, in some cases, their own religion. Here Cool Runnings Cruises takes a look at some of the religions in Jamaica.

Over all, we could say that Jamaica is a Christian nation, but here Cool Runnings Cruises shows you some photos of the main structures that may be of architectural interest to the visitor.

Saint James Cathedral or Cathedral Saint Jago De La Vega in Spanish Town was built in 1714 and is the oldest Anglican Church in the Caribbean.

The name recalls that of the first Spanish settlement Villa de la Vega, which was founded in 1534 as capital of Jamaica.

Shaa’re Shalom Synagogue (The Gates of Peace) in Kingston

The Jews of Jamaica first came to the island in around 1494, as a result of the Spanish Inquisition.

Recent DNA testing has demonstrated that nearly 424 000 Jamaicans are descended from these first Jewish settlers. Bob Marley’s father, for example, was of Syrian Jewish descent.

There are also about 5 000 Muslims in Jamaica and several organizations and mosques. The most recently constructed can be found in Old Harbour and is shown here. 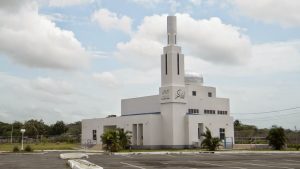 Cool Runnings Cruises know there are also Buddhists and Hindus, the latter are currently the second largest religious group in Jamaica after Christians.

There are also around 29 000 Rastafarians and, in many ways, this religion is most closely associated with Jamaica. It was ‘born’ here in the 1930s and is an ‘Abrahamic’ religion.

This religion emphasizes peacefulness and loving your neighbor, which we note, are also the centrally held beliefs of all the other religions mentioned in this post.

So to end, let us remember ‘Peace and Love’.

Now, after all this serious talk, book yourself a fun-filled cruise with Cool Runnings Catamaran Cruises leaving soon from the dock at Mahogany Bay in Ocho Rios.