Cool Runnings Catamaran Cruises says that coral reefs are known as the rainforests of the seas, but that in Jamaica and around the world, coral reefs have been going through a bad patch. They have been diseased and damaged by violent storms, which create strong waves that pummel the coral reefs and coastlines, then there is overfishing and pollution. Only a startling 8 percent of the coral reefs are still alive. But in Jamaica the coral is slowly being encouraged to grow back. 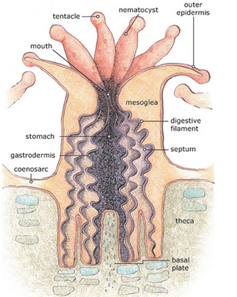 Coral is a tiny polyp only a few millimetres in diameter and a few centimeters long that lives in packed colonies. They create a hard skeleton from calcium that they secrete to make their hard skeleton. Some corals can feed on fish and plankton and others feed on tiny algae. Coral grows in tropical and subtropical waters, but there is also a kind that can live in deep, cold waters.

The Cool Runnings Catamaran Cruises crew discovered there are 6 500 species of coral in the world, which amazingly provide a home to a quarter of all marine life and protect our coastlines, especially in Jamaica. Fish for a lot of us in Jamaica is food, so we know that if we can take care of the coral and help it to grow back, then the fish will return. The coral polyp is so delicate; we have to help the coral grow back.

Here is a drawing of coral from the National Oceanic and Atmospheric Administration (NOAA) via Wiki Commons.

What is being done in Jamaica to save coral?

The Cool Runnings Catamaran Cruises team also know that in Bluefields Bay, and Oracabessa, Jamaica, work is being done to save the coral reefs. 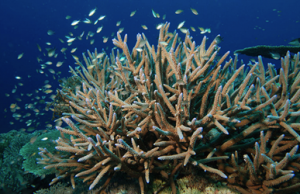 Some of the types of coral being used to build back the reef are those that are known to give fish a good home like the branching Elkhorn coral (Acropora cervicornis), which you can see in the photo.

Non-toxic materials have also been used, for example in the Falmouth port to stimulate the growth of living coral and there are coral nurseries, around 14 fish sanctuaries and a ban on fishing parrot fish and grazing sea urchins. Some of the folks helping bring back our coral reefs include: the Caribbean Community Climate Change Centre, and Seascape Caribbean.

Also where algae feeding fish such as the parrotfish thrive, the coral reef is healthier. So, in Jamaica there are fish sanctuaries to protect this and other grazing fish,

Just think how important a tiny creature like a coral polyp is. It also needs the fish to eat the algae, and the fish need the coral for a place to live and feed. Everything is inter-connected, which reminds me I need to book that boat cruise in Ocho Rios so I can check how the coral reef is doing.

To watch a short video about a coral garden at the Oracabessa Fish Sanctuary, go here.