Cool Runnings Catamarans facts about Jamaica – This time we will tell you a little something about hermit crabs.

If you are on the beach and find yourself suddenly aware of tiny furtive creatures dashing here and there it is probably the hermit crab. They are carrying shells on their backs that have nothing to do with how a crab shell should look. This is because these crabs that have tender bodies that are nothing like their hard-shelled cousins, have taken over a shell discarded by another creature.

Hermit crab shells may sometimes seem too big for them, which is because they do indeed find one shell that fits large enough for them to fit even their claws inside. Then, when they grow some more, they need to look for a bigger shell.

You may find crab racing at your hotel one evening, but we prefer our hermit crabs left free and simple doing their own thing on the beach by the sea. Don’t even think of getting one for a pet, PETA (People for the Ethical Treatment of Animals) says they need their own company; need water to lay their eggs. Some in the wild, we learned, can live for 30 years; but in captivity may die within a year.

They need the great outdoors where they can molt, live and most surprising of all, they need to forage with other hermit crabs. 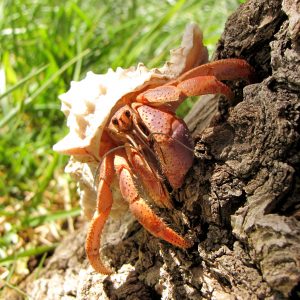 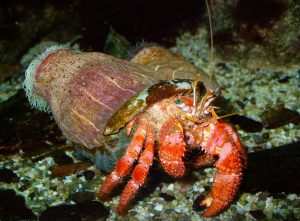 Large Red Hermit Crab with an anemone on its borrowed shell 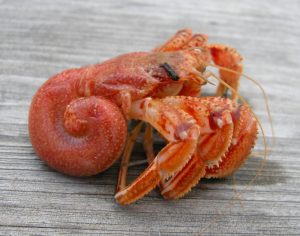 There are 1 100 species of hermit crabs.

Those that live in the sea may have a sea anemone growing on their borrowed shell.There are also the land-loving hermit crabs, such as the one pictured climbing up the tree, but they also need to be near water to lay their eggs, and where the larvae live out their lives.

Here is a photo of a hermit crab without its shell showing the soft, curled abdomen.

Surprisingly, and here is the Cool Runnings Boat Cruises tidbit – some hermit crabs have been seen to create a chain to exchange shells.

We didn’t believe it, so why should you? So, just to prove it, here is a fantastic video clip from the BBC on how the hermit crabs exchange ‘properties’ .

We wonder if a successful exchange of shells means networking and cooperation, something we may know about! Let’s take a note from the hermit, or soldier crab and do some fun networking on the next Cool Runnings Catamaran Cruise leaving from Mahogany Bay in Ocho Rios in just … how many minutes? Wait for me!